Transmutation is probably the strongest indicator of the nuclear, non-chemical origin of the various observed anomalous results in LENR experiments. Other types of nuclear radiation are relatively sparse: only very low levels of gamma radiation and neutrons have been reported. Some soft X-rays are likely to be present because of bremsstrahlung produced during beta-decayed electrons, but they probably escape detection because most would be expected to stay inside the reactor, not having enough energy to penetrate the enclosure walls. In contrast, transmutation products have been found in numerous experiments. Of these, a significant fraction has shown transmutations of the electrode material (Pd, PT, Ni, Ag, etc.). The appearance of heavier elements such as manganese, cerium, titanium, and ytterbium in relatively simple LENR laboratory experiments has generally been discounted by consensus science, since transmutations are not considered possible within a laboratory setting – their models are unable to explain transmutations under such circumstances.

To repeat, from our point of view, the main problem with existing models is that the nucleus is deemed to have no structure. This prevents discovery of the cause of factual phenomena such as the asymmetric breakup of the actinide nuclei, as was discussed above. Therefore, we suggest that transmutations should be the primary suspect as the source of excess LENR energy. If we are correct in our hypothesis, then transmutation products should be present in most, if not all LENR experiments, even if they are not obvious or not looked for. We should see two types of transmutation events: fusion and fission, depending on the setup and the materials involved.

In the foregoing we argue that SAM has plausible explanations for many physics phenomena that present models do not. We think that there is enough reason to perform a series of experiments that will show whether SAM can conclusively prove its ability to make predictions in the realm of transmutations. At this stage we would like to propose to the community of LENR experimenters, and other interested parties, to think about setting up some well-defined tests that could be performed within their existing laboratory or “garage shop” capability. These could include plasma experiments (also OH plasma), electrolytic cells (F&P type), exploding wire experiments, and many others that are used in LENR. We have in mind specific monoisotopic reactions derived from SAM, targeting proton capture as the most promising process as well as fusion of materials with oxygen. We would suggest specific materials, down to which isotope to use, that should be receptive to proton or PEP capture or oxygen fusion. This should result in unambiguous, reproducible transmutations which exist at the core of LENR.

In our conceptual model for LENR, transmutations take place in electrified environments, through energy release of a double-layer (DL) breakdown, through electric discharges or when plasma transitions into arc mode under the influence of a strong electric field. Plasma breakdown in double-layers has been studied by SAFIRE (Stellar Atmospheric Function In Regulation Experiment), an experimental setup based in Canada with very interesting results related to transmutations. SAFIRE experienced such an electrical breakdown in 2017 when a tungsten probe for measuring electric fields vaporized in an instant when it got too close to one of the plasma shells The same thing happened in 2019 when the anode, also most likely made out of tungsten, melted. 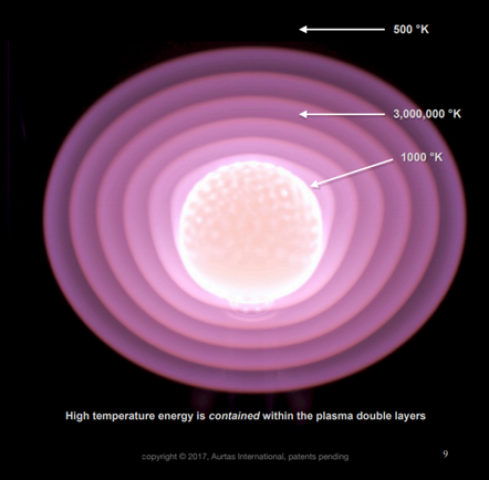 In the figure above are shown several concentric shells of double-layers inside a plasma in the SAFIRE chamber.

Extraordinarily strong electric fields were measured before the probe was vaporized. In the following figure we see anode “tufts” that coalesce in a plasma shell as the current is increased.These double-layers can store an enormous amount of charge/energy. In our opinion the tungsten probe in 2017 as well as part of the anode in 2019 transmuted. The tungsten in the anode actually fissioned. Fission of stable metals happened in the SAFIRE chamber! Very similar to typical uranium fission, we see a bigger part of the nucleus as fission product (barium, cerium, lanthanum), which also show up in uranium fission and several smaller pieces. Looking at the structure of tungsten, it is no surprise that we see the very similar heavier fission products.