In the development of SAM, we have identified for each element the array of potential isotopes that are possible from a structural point-of-view. Then, by checking for the isotope abundance, we determined a probable structural configuration for each one. For each element, there exists a basic structural configuration which we might call the base isotope. These have no extra (non-required) “neutrons” or PEPs, as we define them in SAM. Usually this basic structure offers unambiguous connection points for these extra PEPs to potentially attach themselves to. When one or more of these sites become occupied with an extra PEP, an isotope of the element is created. The specific configuration varies from element to element, but the general trend is that the larger the element the more potential places there are for extra PEPs – however those that are more densely packed will be preferred. The excited state of a nucleus reveals itself to be a misplaced PEP on a nucleus in this model. After some time, it will fall back to its correct position, emitting the corresponding amount of energy. The proliferation of possibilities is clearly illustrated in the fictional nucleus. This process also results in establishing for each element the maximum number of isotopes since this maximum is determined by the number of connection sites available. For example, for carbon SAM yields a maximum number of 8 additional PEPs, which is in accordance with the observation that carbon-20 is the highest number that carbon can reach. 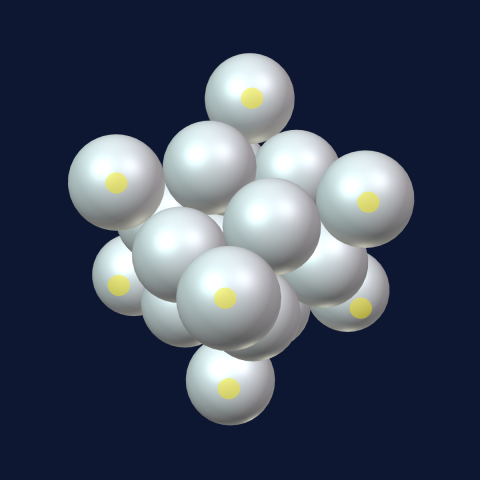 An important factor in building the SAM PTE is to determine whether a particular configuration is stable. Isotopes can be unstable because there are too few or too many PEPs compared to the base configuration. This instability can result in nuclear decay or transmutation. In each case there exists a decay path between the isotopes, some of which may include transmutations to a higher or lower Z number. SAM correctly predicts the stability, and the degree of instability for the non-stable elements and isotopes and in many cases, we can estimate the half-life of a nuclear species, but so far only in a qualitative, order-of-magnitude sense.