In the discovery of the properties of the nucleus, energetic considerations, and binding energy (BE) play a major role. Empirically determined BE values through equivalence with the mass-defect are available for most nuclides, but not all. BE values are typically published as averages, on the order of 8 MeV. Some of them are only theoretically derived from the semi-empirical mass formula by von Weizsäcker or derivations thereof. This formula has five parts using volume energy, surface energy, Coulomb energy, asymmetry energy, and pairing energy-formula, while being based on the liquid-drop model. The result is a complicated function of atomic number Z and the number of neutrons N.

Calculating binding energy. Our calculation is based on the simplest connected structure, the deuteron – a single line with a known BE value of 2.225 MeV. As discussed before, the deuteron is composed of a proton and a PEP – or two protons and an inner electron between them. The repeating structures in the nucleus are associated with a predetermined count of those lines, based on the number of available connections between a proton and neighboring protons.

By multiplying the number of lines of the components with the single line value, we get the total amount of binding energy for a nucleus. 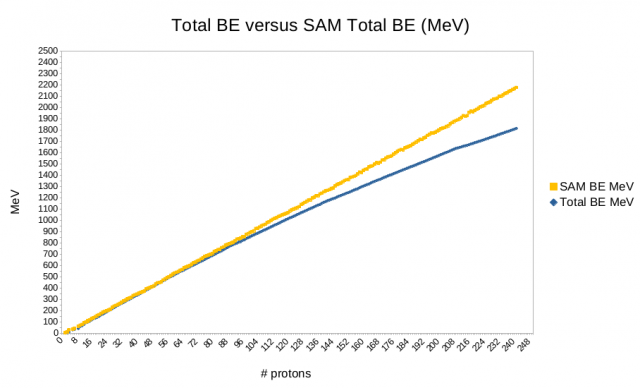 We therefore find an expected divergence from the familiar BE curve above iron/nickel, where the first significant branches start to appear. We attribute this divergence to energy inherent in the progressive distortion of the structure through branching as more nucleons are added, to the point that the nuclei become unstable. This store of energy, apparently invisible to current physics, appears to be associated with the amount of energy potentially available in a fission reaction. It can be equated to unfulfilled dense packing, energy that could be released were it not for branching. The same data set is used to display the difference between neighboring elements for both SAM and the “standard model”. 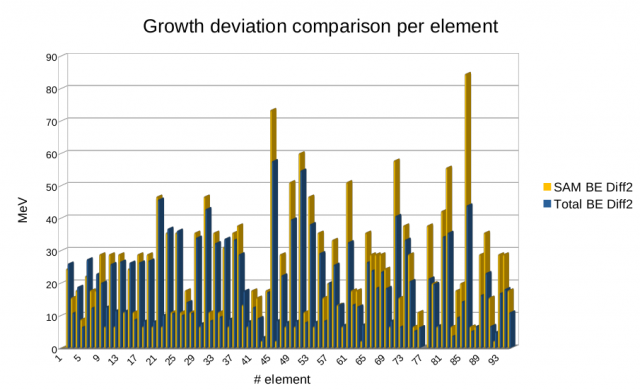 Despite individual deviations between the two series, they are clearly strongly correlated. Here we see the effect of the changing structure between one element and the next one, an effect that is hidden in the standard model data as it is normally displayed as an average value. This result shows that even a simplistic “counting of lines” has validity in revealing structural effects of the nucleus that cannot be seen in any of the versions of the "standard model".