Help Us Make the Next Step Forward

We are a small group of enthusiasts that have donated our time and money to create this site.

Help us bring the Science of the Electrical Universe to the people, They're ready for it!  Anything you can do to help out is greatly appreciated.

The concept of duality is essential in understanding our existence.  Everything we touch, feel, see, hear - both physical and non-physical is dual in nature.  Hot and cold, big and small, hard and soft, love and hate - these are all duals of each other.  One cannot exist without the other.

SAM postulates that the nucleus is made up of protons and electrons. These particles are the epitome of duality.  They are opposites of each other.

The proton is positive and makes up the structure of the atom.  This structure is stable therefore the protons do not move.  The basic building block of the larger atoms is 12 protons in the shape of an icosahedron.

The Icosahedron and Dodecahedron are Duals of Each Other. 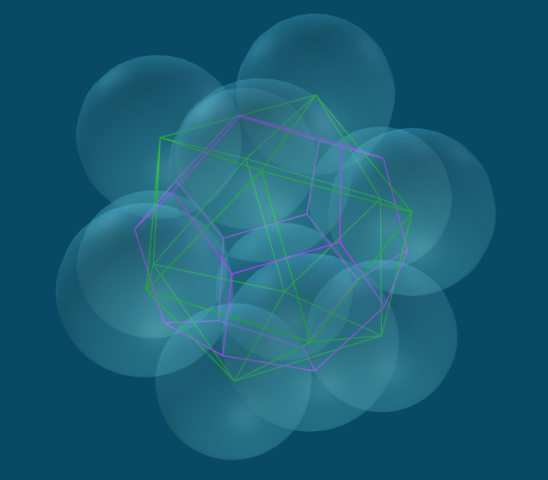 Equilibrium is defined as - a state in which opposing forces or influences are balanced.

Systems tend to want to reach a state of equilibrium.  Nature does not like for things to be unbalanced.  Once a system reaches equilibrium, it typically becomes static and motion either ceases, or the motion within the system is related to other motion within that same system.  This means the motions become interdependent and influence each other.

Edo realized that the atom is most likely a structure that has reached equilibrium.  The forces at play are all working together to create and maintain the structure.  He also figured that once an atom has formed, it's structure remains static and unchanged unless energy is added to that structure. If the structure changes, then the element also changes or it becomes an isotope.

Carbon has a perfect icosahedron structure, This is the reason the dodecahedron can be formed with the support of the carbon icosahedron! On its own a dodecahedron cannot be created in spherical geometry. this clearly shows the inter connectivity between the two!

Carbon however has 12 electron and not the 20 required to complete the vertices of the dodecahedron, meaning the electron structure is not complete or perfect when we are looking at Carbon.

This is the reason for chemical reactivity.

When we look at Neon, the electrons are now a total of 20 electrons and the shape is complete and perfect around the icosahedron. However Neon does not have 12 protons, but 20 and this means the proton structure is not perfect anymore, but instead has created the base for the next icosahedrons (2 growing directions)

So no matter what, an element will never be whole or complete entirely. Either on the Yin or the Yang on the protons or electron structure is some imperfection or room for growth!

This is an important thing to recognize because if this principle were not there, atomic growth would simply stop at Carbon or Neon for example, in reality the universe would become very rapidly very static and not allow for the dynamic we witness!!

So even despite the fact all strives perfection and that can even be reached... it will never be in balance completely. this allows for growth and decay both!